The popular series of game reviews continue! Provided you read popular as made for people to like it, not them actually liking it. Anyway.

This time, the game is rather indie and it's even in early access on Steam, link here. It is, supposedly, a "train dispatcher simulator", the interface of the game being your typical railway signal box display, the basic controls being roughly what you would actually use if you were doing the job.

This would not be the first simulator of the kind, there's a whole bunch of these just for the CZ (/SK) railways, many of them trying to replicate full functionality and the interface 1:1, being simulators as much as possible. Rail Route, on the other hand, doesn't pick one particular product or standard to simulate, even though the default map selection and the overal feel would strongly indicate the authors are some kind of mitteleuropeans (haven't bothered to look it up, sorry). And it doesn't really try to simulate.

There are few things here that are significantly different from a "real" simulator. First, the layout of the railway is very simplified, many elements are just not present, there are no crossings and indications, no industrial sidings (sort of), your train stations only have few tracks, all of them are implied to have a platform. The numbering is only present for the main station tracks and no other elements really have prominent names because you are never going to need to pick up your radio and call a train driver to tell them to stop on the track 201 in front of signal 7a, or something like that. It's not like you would do that in a simulator either, but the real world signaler/dispatcher would and often does. You don't really care about the parameters of your trains either, they only have a vague category, a timetable and max speed. You are completely free of having to think about the lengths, while both in the real world and a simulator, not sending a 650 meter long freight on your 300 meter long track number 201 is a significant concern.

There is no shunting, all signals create a train path, there is a gameplay element of a "train depot", but it's taken more from Transport Tycoon than a simulator. Some trains are only one-headed and are restricted to 30 km/h when the cab is not in the front, but that's about it. Now, I'm not listing this as "game bad" for not having all of these, in fact, each map is basically an entire major railway hub and in "the real world", this would be an almost impossible workload for one person to handle. And managing just few adjacent train stations on a single line would maybe not be very exciting for a game.

What the game, however, does have, and the real world and simulator does not, is that neither your track layout or timetable is fixed. In fact, much, if not most, of the gameplay comes from building your layout and timetable yourself.  You actually start with an almost empty map and only few tracks and like one "commuter" train regularly going between them. The rest is only outlined, other stations you can have are in fixed positions, there are these dashed lines that cannot be crossed with a track and the rules for putting the tracks in place are simple and strict. This means you must build your tracks and layout, but you don't have infinite options as an engineer and projectant in the field. The options you have are a combinatorial result of a very puzzle-like set of rules on a finite board.

Another gameplay element comes from having money and research points. Not only there are strict rules for what you can build, but you also have to pay for it from the money you get from doing your job, that is getting the trains where they are supposed to be. And from the start, you are barred from using many more "advanced" elements, you have to unlock them by spending research points which you also obtain in the same way, though they have two tiers and the red ones are only given to you from "non-regular" or more sophisticated "later-game" contracts, so you have to break your routine a bit to get them.

So, what I want to say here. This is a puzzle game. Everything is very deterministic, there are no delays, the trains always arrive when they should, always will do the same thing under same conditions and the conditions are set by simple and easy to understand rules. While in a "simulator", the gameplay usually comes from improvisation because the trains being delayed and slightly unpredictable is an important element in these (and the real world too), this doesn't happen in Rail Route. And the more "advanced" gameplay reflects this perfectly, there are basically automation elements you unlock after your first few trains. At first, you have to do everything by hand, you need to pick the track for your train to "spawn", you need to click at each individual switch and then set the appropriate signal. After few research points, you get more "real" signal that let's you just click on a path you want to take and can be set to just "auto", repeating the same route again and again. But then you get routing elements that actually bring the puzzle part of the game out completely.

In short, you get basically three "auto" elements, arrival, departure and routing sensors. What these do is you put them on a specific track or platform and link to a signal to tell it what to do upon certain conditions. You place your routing sensor and tell it to build this train path if a train with destination X passes through and another one for a destination Y. And so on. The aim of the game at this point is clearly not to handle your traffic, but to build it up so it just works by itself. And you also have almost complete control on what trains you get, you have to accept contracts like "a train from station X to Y, expected Z avg speed" and then you always get the train at the precise time. The contracts are randomly generated, but you can reject them until you get one you kinda want, or you can even define them yourself, they are just paid less, which doesn't matter much.

And this of course ties to the strict building rules you have. The space is very limited, you cannot arrange your tracks whatever you like, you only have very finite amount of combinations. Your routing sensor will need one rectangle of track without any other element and you have maybe six or five rectangles there to work with. It's a lot of combinations, but it's a chess like complexity, not engineering like complexity.

So. This was a lot of words just me telling you this game is a train themed puzzle game and not a dispatcher simulator. But I still played it and liked it, it's a good game!  No prior train dispatching experience is needed, there is a tutorial and some hints and documentation you get, they feel adequate. It looks nice and modern, doing what you are supposed to do feels satisfying, when you end up with everything running on its own in an interface like this, that doesn't necessarily communicate it's supposed to run on its own, it does feel really good.

As for what I did not like, mind you, early access (and it's like 13 euros, so it's not an expensive game), but... the music is like super dull. It's like fallout 1 background music if it was so bland you would struggle to notice it's there. Not that it matters much, just put on whatever you like, but still, it could come with some nice tracks, couldn't it. The research is  a learning experience on the first or second play, but then it only gets tedious, I have learned how to do things by hand, I don't like doing it again, just let me build the "real deal" right away. Especially considering even things like "the train having its destination displayed on it" is also a research item you have to unlock. Nah. Money that you need to build things (and you need quite insane amounts for faster tracks later on) are a more balanced gameplay feature, though it's also a number that only goes up and you can simply wait for it to do. You get penalty fees for being late, but not super much. You screw up one or two trains, well, whatever, another two will get you back to black, no lasting damage or a real setback.

So, I got one, few months ago already, and now I figured I may write something about it, because of course everyone is so curious about this thing, right? hardware, what you buyLet's go over the hardware first. So, the laptop is light, quite thin and generally looks much more 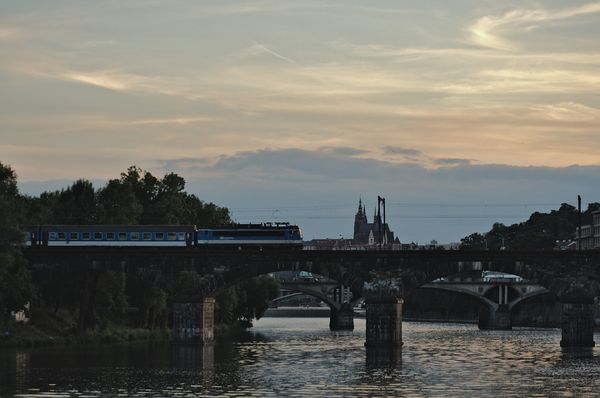 Just before the dawn of July the 4th, a regular passenger train crossed Vltava on the Negrelli viaduct and it will be the last one for almost two next years. The viaduct is going to undergo a relatively large reconstruction and repair. Sadly, the arches demolished during the late communism